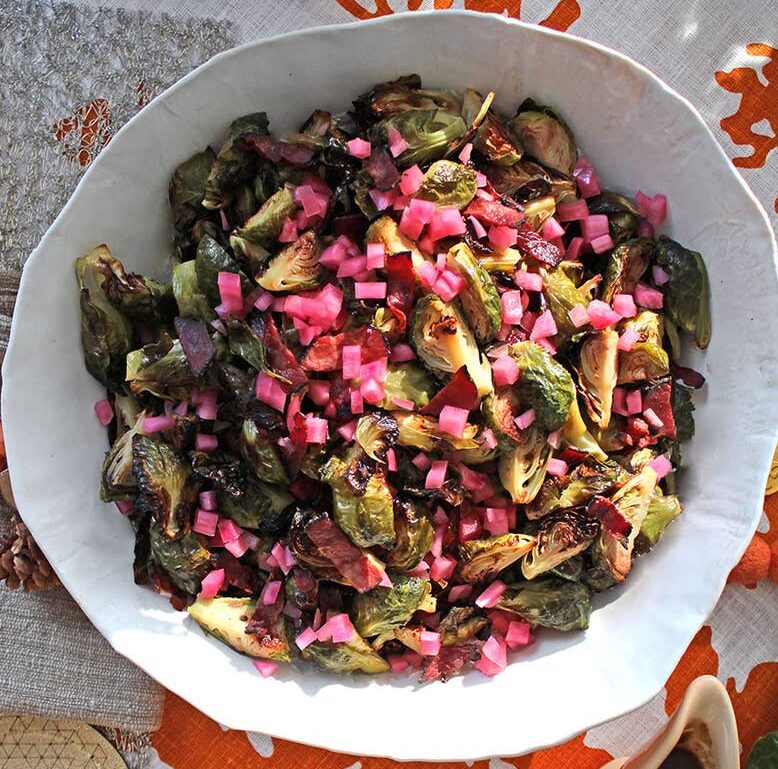 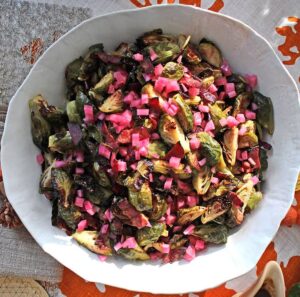 Originally created for Thanksgivukkah, but a keeper for anytime!

Bring vinegar to a boil in a small saucepan. Add sugar and salt, and stir until dissolved. Turn off heat and let mixture cool for about 5 minutes. Put diced onion in a large heatproof container, and pour vinegar mixture over. When mixture is room temperature, refrigerate for at least a day.

Melt butter in a large skillet or sauté pan over medium heat. Add pastrami and cook over medium heat until browned fat has rendered out, about 3 minutes. Pour pastrami and fat into a large heatproof mixing bowl. Add Brussels sprouts, salt and pepper, and toss to combine. On 2 large baking sheets or shallow roasting pan spread Brussels sprouts out in a single layer. Don’t crowd the pans. Roast for 35 minutes, removing pans from the oven at the 20 minute mark to move the Brussels sprouts around a little, then rotating the pans from top to bottom rack before putting them back in the oven for the remaining 15 minutes. Brussels sprouts will be dark brown and crispy around the edges.

Strain the pickled red onions and reserve 1/4 cup of pickling liquid. As soon as the Brussels sprouts come out of the oven, toss them with the red onions and the 1/4 cup of liquid while they’re still warm. Serve immediately or can keep at room temperature, though better warm.